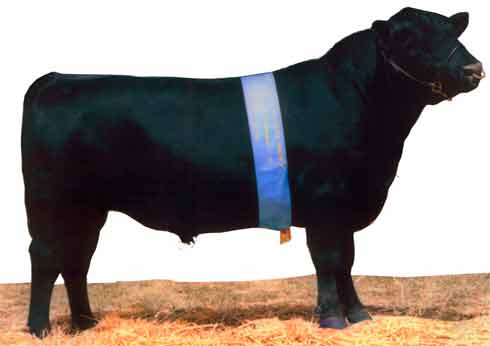 There are 26 kinds of miniature cattle.
The bull above is NOT ONE OF THEM !!!!!!
He is Avonsleigh Atlas, Canberra Royal Show Lowline and Interbreeds Champion, who, although not much bigger than "bigger miniature cattle", is actually an Australian Lowline, the smaller version of the reknowned black polled Angus.

Unlike "miniature cattle" which have mostly been developed for backyard pets, Australian Lowline Avonsleigh Atlas comes from a background of the very best Angus cattle in the world. He traces his ancestry back to Earl Marshall,one of the best Angus bulls that ever lived, and Erica, the supreme matriarch of the Angus breed. Although 30% smaller than a standard Angus bull, Atlas is certainly not a toy. Atlas is serious "beef cattle" rather than "miniature cattle."  He's also placid, docile, good natured and just loves bread rolls.

So what's this you've read about "miniature cattle"? Well, some people will try to sell you "miniature cattle" for lifestyle blocks and small acreage farms, and they do sound kind of cute to show off in your paddocks, but Australian Lowline small Angus cattle are a far better proposition.

Australian Lowlines are designed to be 60% of the size of a standard Angus to satisfy the 21st Century requirement for smaller and healthier cuts of beef. Lowlines are very beefy and blocky, produce 40% more dressed out beef to the hectare than any other cattle breed and, in Australia, both purebreds and cross breds are winning carcass contests (ABCAS evaluation system) and Australian Meat Standard awards against all comers. An example is Margo Hayes of Queensland's Vitulus Stud which has twice won Supreme Champion All Breeds Beef Carcass at the Queensland Royal Show with Lowline-x steers. That's pretty well the top beef award in Oz.

Check this for Lowline performance in beef cattle classes in NZ.

Casablanca Lowline Stud, based at Whangaehu near Wanganui, New Zealand(previously at Kumeu, Auckland) welcomes your contact about Australian Lowline Cattle and why they are better than miniature cattle.
You can ring us on New Zealand 06 342 6670 or Email us or join our mailing list to receive current Australian Lowline news.


SMALLER BY DESIGN
For the last 150 years beef cattle have been bred big to produce the huge slabs of meat that were a symbol of affluence for our ancestors. Australian Lowlines have been designed to reverse that trend.

HEALTH CONSCIOUS
Better educated 21st century markets require smaller higher quality cuts of meat with just the right amount of marbling and only a reasonable amount of sub-cutaneous fat. It is for those markets that Australian Lowlines have been developed.

HOW'S THIS FOR PERFORMANCE?
Purebred Australian Lowline steer Allambie Apocalypse didn't get a look-in at the "on hoof"classes at the Quirindi Prime Stock Expo. Then came the carcass judging. Allambie Apocalypse's 87.567 score on the ABCAS evaluation system was good enough to have won the light weight section at the Sydney Royal Show. At Quirindi, he beat all light weights and was 3rd overall when the heavy weights were included. Australian Lowlines are bred for better beef.